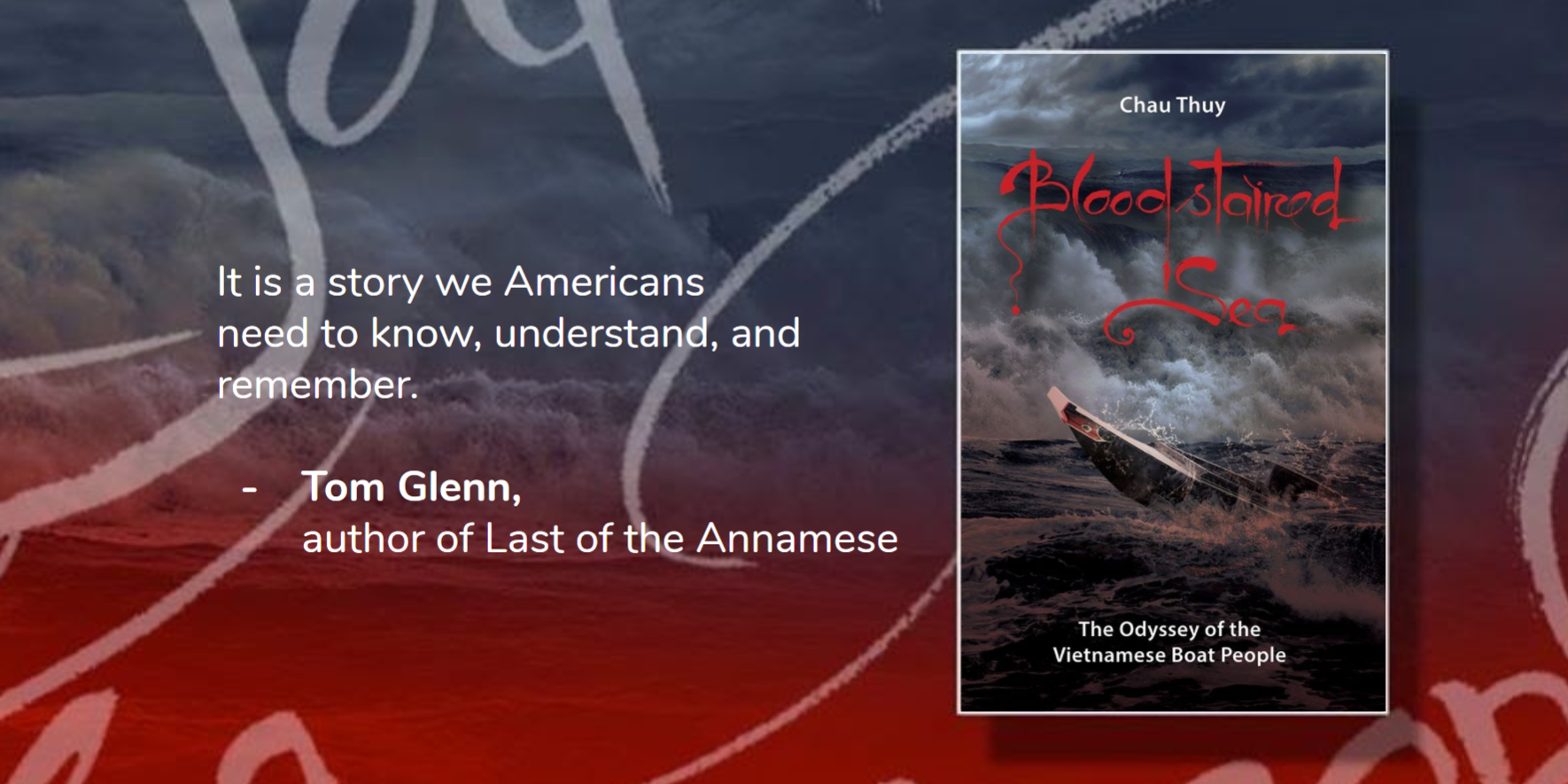 Bloodstained Sea is a novel about the escape from South Vietnam of those fleeing the North Vietnamese communists who completed the conquest of Vietnam on 30 April 1975. The author, Chau Thuy, lived through that exodus of hundreds of thousands of people. As many as 250,000 died at sea. Some 130,000 eventually made it to the U.S. Thuy himself arrived in the U.S. in 1980. He wrote text of the novel first in Vietnamese, then translated it himself into English.

This novel, like so much of my own writing, is fiction in name only. The events Thuy describes did indeed take place. That makes the story all the more disturbing. I came into possession of the book because Thuy sent it to me.

Thuy’s story is deeply personal to me. After thirteen years of being in Vietnam almost constantly, working with American troops on the battlefield, I escaped by helicopter under fire on the night of 29 April 1975 after the North Vietnamese were already in the streets of Saigon. I suffered ear damage from the shelling and was diagnosed with amoebic dysentery and pneumonia due to sleep deprivation, inadequate diet, and muscle fatigue. But the worst illness resulting from the fall of Saigon and my earlier time on the battlefield was Post-Traumatic Stress Injury (PTSI) which I still cope with today and always will.

Hence, the book has personal meaning and value for me. The reader of this review will have to bear in mind my bias in evaluating Thuy’s work.

The two principal characters in the story are a young man named Vu and the woman he loves, named Van. Vu goes from Lam Dong Province, in the southern reaches of the central highlands, to Saigon where he hides out until it is time to get to the coast for a boat. En route to Saigon, he meets the seventeen-year-old Van who is helping her father with escapees. Though neither expresses love, Vu and Van are stricken. The two take different routes over sea to flee to southern Thailand.

Both trips are strewn with tragedy. Many die en route. Extreme hunger results in cannibalism. When Thai pirates appear, the escaping Vietnamese swallow coins and jewelry. The pirates rape and kill them indiscriminately. The sheer brutality of the pirates makes for text that’s hard to get through. The sea is literally stained red with their blood. But eventually, Vu and Van arrive separately at a refugee camp in Thailand. It is there that Van discovers that she is pregnant as a consequence of being repeatedly raped.

I won’t give away the end of the story. Suffice it to say that many of the relatively few survivors manage to reach the U.S. and begin a new life. But as a sufferer of PTSI like me knows, the horrors one has lived through never leave the memory, never dim.

Some oddities that haunt the text derive from the origin of the story. All the male Vietnamese characters smoke cigarettes. My memory of South Vietnam confirms that nearly all men I knew there did indeed smoke. The problem is that for people to light a cigarette during an intensely emotional moment distracted me from the power that would otherwise have engulfed the story.

In the same way, the English Thuy uses is sometimes awkward. Casual slang appears next to formal constructions. Characters use idioms that often feel out of place. The English usage sometimes doesn’t fit the story being told.

At times, it’s not clear what language the characters are speaking to one another. When they converse with Americans or Thai,  what is the common tongue they’re using? And Vietnamese usage carries over into the English. Where English uses personal pronouns such as “I” and “you,” Vietnamese instead uses terms expressing familial relationships. An American reader will be puzzled by characters referring to one another as “sister,” “cousin,” aunt,” or “nephew” when the characters are not actually related. Vu and Van call each other anh and em. Those terms mean “older brother” and “younger sister,” and are common in casual or intimate relationships. But Thuy doesn’t explain why the characters use those words.

The novel is occasionally repetitive. Vu and Van on their separate trips encounter similar hardships and tragedies. This reader became impatient when the same barbarisms recurred in a new setting.

In fact, careful slimming and reduced redundancy would increase the power of the story. Thuy could possibly have told of only one of the two journeys, either Vu’s or Van’s, and have allowed the reader to assume that the same monstrosities characterized the other. Too often, the story slows down because the writing is expansive when clipped English with short sentences would have worked better. And I found myself unable to keep up with all the characters—22 major characters are listed at the beginning of the text. Their names written in American English without the Vietnamese tones and diacriticals are so similar that I had trouble remembering which was which. I mixed up Tam and Tram, Tuan and Huan, Hai and Mai.

On the other hand, one very effective device Thuy uses is regular quotations from Van’s diary. They allow us to see inside Van’s soul and the torture she goes through. She addresses almost all entries to the love of her life, Vu. She emerges through her own writing as a believable and deeply moving character.

And Vu regularly draws pictures. The description of his artwork conveys his feelings exceedingly well. His bent for pictorial expression is one of the clues that tell the reader that Vu is based on Thuy himself. The book is filled with exquisite calligraphy drawn by the author.

Despite the drawbacks that will make this book difficult for American readers, I finally concluded that it is a worthwhile read. The love story that undergirds the entire narrative is persuasive and moving. The courage and endurance of the characters is heart-rending, but also an authentic portrayal of what the Vietnamese refugees were like.

But most important to me is that Bloodstained Sea accurately records what those escaping from South Vietnam actually went through. It is a story we Americans need to know, understand, and remember.